Romero
**Note** Because of my blogs rating, some words had to be BLEEPED.
For those who already know Romero, you understand.** 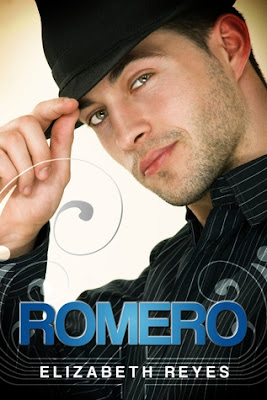 Judy: “Welcome to my blog, Romero. It's been some time since you've been here.” Judy struggles to hide her mischievous smirk.

Romero: With an equally mischievous smirk, he sits up a little looking Judy up and down. “Yeah, thanks for having me again. I missed you, Judy.”

Judy: Clears throat, mischievous smirk gone now. “Ahem. Well, thank you for joining us today. It's always good to have you on. I don't want to take too much of your time. I have a few questions for you and Elizabeth has a couple of questions her readers have sent her over time about you and Isabel. How is Isabel by the way?”

Romero: The mischievous smirk morphs into an all out smile. “Izzy is as beautifully perfect as always. Thank you, Judy. I'll let her know you asked.” His eyelids lower at Judy and he grins once again.


Judy: Appears to be caught up for a moment but snaps out of it and takes a drink of water. “Very good to hear. Let's get this started, shall we? So over time, Elizabeth has been asked about your legendary temper. In the book, we got to see it quite a bit. Here is one specific question Elizabeth gets quite often. 'Romero's explosive temper, while a little scary at times, was also very sexy. He was so vulnerable when it came to Izzy. Has being with her tamed him some?'”

Romero: The smirk has waned a bit. “I don't think my temper was ever that bad. Explosive? Scary?” He chuckles with a shrug. “Nah.”

Judy: Looks into the camera incredulously, then back at her handsome guest. “Romero, your temper goes way back to before you even met Isabel. Maybe not scary, but arguably explosive is a pretty accurate description.”


Romero: He rubs the back of his neck frowning a bit. “Well, I wouldn't call it an explosive temper. I don't remember anything too bad.”

Judy: “Let's take a look at this scene where a young lady named Cici, who worked at your uncles' bar, was assaulted by her boyfriend. Here, even after beating him pretty bad and walking away with your uncle, you're still visibly very upset and even seem to want to go back and finish him up. Your uncle even refers to your temper. Let's watch.” **hits play**

Cici walked around the car. “Get inside, sweetheart.” Manny grabbed Romero by the arm and began walking away. “Get him the fBLEEP out of here, guys. He comes back, have him arrested.”

“No, call the cops on his ass now!” Romero yelled.

Manny shook him. “Are you outta your mind? I call the cops now, they’ll take you both in.”

Romero yanked his arm away from his uncle, feeling an immense urge to go back and pound on Fred some more.

Manny must’ve seen the look on his face. “Keep walking, boy. You make sure that temper of yours stays under control, Son, before it buries you. Don’t you even think about going back there.”

Romero: He sits up a little straighter. Still looking every bit as unfettered as before the clip played. “Anyone would've reacted that way. The asshole hit her.” His expression suddenly goes hard. “A dude hit a girl in front of me. Yeah, I wanted to beat his ass into the ground. I still would now. But that has nothing to do with my temper or being under control. That shit just don't fly around me. Never will. And honestly, I don't know any guy who would stand there and let it happen either.” He shrugs once again smirking. “I just get a bad rap.”

Judy: Nods in agreement. “Okay, you got me there. I don't think any of your friends would've let that fly either. Not then or now. And just so you know, not everyone gives you a bad rap. Marcy from Miami wrote to commend you on not losing it like she expected you to when you found out Isabel had gone ahead and went on that date her sister set her up on.” **hits play**

Romero: With an eyebrow lifted the smirk is suddenly gone and—was that a groan?

With his heart already pounding away, he attempted to speak. “Why would she still expect you to go if you’re with me now?”

She didn’t say anything. He stopped what he was doing and stared, feeling the hurt pummel through him. She still hadn’t told her sister.

She flinched when he yelled, and he immediately regretted it. That was it, if he didn’t get out of there now, he might do or say something worse that he’d regret.


Judy: **hits pause** “See?” Judy smiles. “Much better, you walked away. And the way you handled it later, very mature.”

Romero: Shakes his head not looking the least bit amused. “That was a hell of a day.”

Judy: Seeing Romero sit there now, his jaw actually working as he appeared to be recounting that day, Judy decides to remind him, like Isabel did that day, everyone makes mistakes. “Not as hellish as Isabel's when she was sick. She was already not feeling well and then you let her in on what you did that day. Remember? How could you, Romero?”

Romero: “It really wasn't that big a deal.” With a smirk tugging at the corner of his lip now he adds, “Personally, I think maybe she overreacted a little.”

Judy: Tilts her head, not about to let him off the hook. “Really now? So when she turned the situation around just a few minutes after she overreacts, you didn't have an issue with it?”

Romero: Pinches his brows while looking a little confused.

“The way you are, I was under the impression that things of this nature were out of the question.”

Romero felt himself heating up. “They are!”

She spun around. “Oh, really? But not for you?”

“Good to know. I’ll make sure I only do things with guys who are different.”


She started to walk away, but Romero held her arm. “What the fBLEEP does that mean?”

Judy: Hits the pause button and lifts a brow at Romero

Romero: Squirming a bit in his seat, and that ever-present smirk going a little flat, he responds, “Forgot about that. But when she put it that way, ya know? It made it sound like maybe she was...” Stops when he realizes he's not convincing Judy. Again he flashes her that smile and sits back. “Alright maybe in that one incident I did get a little hot, but I apologized after.” He goes a little pensive. “And not just any apology either. You can ask her about it.”

Judy: “Yes, I recall the apology. I think aside from your short fuse, your vulnerable side was also something the readers really commented on. Some of these folks don't know you yet, so we won't talk about you landing in jail. Let's leave them with something positive to get to know you by.”

Romero: That seemed to shift his mood again. “Thank you, sweetheart.”

Judy: The power of that smile of his has Judy speechless for a moment, but she quickly regains her composure and clears her throat yet again. “After the shooting. We really got to see a softer side of you.”


Romero: Shakes his head. “Worst damn week of my life.”

His eyes began to flood, but he was without expression. He hugged her. At first softly but every breath he took, he hugged her even harder. He didn’t say a word and she didn’t ask anything else, just ran her fingers through his hair until his breathing began to calm. Without letting go of her or even pulling away to face her he finally whispered against her ear, “Please don’t leave me. I promise I’ll try harder.” Slowly he pulled away and their eyes met. “I’m nothing without you, Izzy.”

Romero: This particular scene has Romero staring a little longer. A little quieter. Judy waits but he says nothing, even after she presses pause.

Judy: “I think all of Elizabeth's readers, and fans of the Moreno Brothers series were surprised about your story. They all seemed to love getting to know you better, and those crazy uncles of yours. For those that haven't read it, I can assure you, you're in for quite a ride.”

Romero mumbles something under his breath. Cautiously holding her thumb on the bleeper, Judy glances up from her notes.

Romero: Shakes his head. “Never mind, don't even get me started on Manny and Max.” He laughs suddenly. Then motioning to the bleeper in Judy's hand, “You're going to wear that thing out.”


Judy: Smiles as well. “Okay...one more question on a different topic. Readers have agreed with Elizabeth that if she had to pick any song that reminded her of your feelings for Isabel it would be Crazy by KC and Jo Jo, particularly around the time things didn't look so good for the two of you. Would you agree with that choice?”

Crazy by KC and Jo Jo

Romero: Snaps out of the somber mood that last clip seemed to put him in and flashes that smile again. “There are a few other more romantic songs that would be my first choice for our song. But yes, for that particular time, and because since day one it's what I've always felt about Izzy—crazy. Then yeah, I agree.”

Judy: “As always, Romero, it was so much fun having you here and revisiting some of these scenes. Any parting words?”

Romero: “It was great to be here. Maybe next time you have me back I'll bring the rest of the gang, and you can have them explain some of their explosive scenes.”


Judy: “For sure since there are plenty of them as well.” With a playful smirk of her own, Judy looks into the camera. “And a little birdie tells me Ms. Reyes is working on more Moreno books, so there may be even more of those explosive, emotional, and gut wrenching scenes to come real soon.”
********************

Here are all the links connected with Elizabeth Reyes on my blog:

The Moreno Guys interviewed just before
the release of Making You Mine,
the virtual talk show where the entire
cast takes the stage and are put on the spot