Christmas on Scandal Lane
Scandal Beneath the Stars

Slade Mason, the Earl of Drake, returned home on his ship to find that his brother, Graham Mason, the Marquess of Hertford, was in a serious carriage accident, leaving his father dead and Graham with serious injuries. And it seems that it might not have been an accident. Returning to the family home in Dover, Slade runs into his friend’s little sister. Only, Bella isn’t so little anymore.

Lady Arabella “Bella” Stewart had admired Slade for a long time. He’d come to their home with Percy, but he’d never noticed her…or so she thought. So she was more than excited that he started courting her.

A bad time to start courting, for sure. There was danger in the air, and Slade had to find out who their enemy was before anyone else was hurt. This is a shorter story but packed full of suspense and romance, with the added comic relief from Gracie, the dog.

Lady Susan Winslow was outraged to find her father had betrothed her to some old earl. Her parents' marriage was a love match, and she wanted no less for herself.

Lord Grayson Harding had inherited the title since his father and elder brother passed away. His mother was trying to find a wife for him...so he took it into his own hands to find a wife and goes signs a betrothal agreement. When he runs into his old friend, he finds more than friendship. Something odd is going on with her brother and her stepmother raises the hair on the back of his neck.

A wonderful novella. I loved the characters...except for the villain, of course. It has a hint of Christmastide magic, too.

Book 1: The Earl She Left Behind
Maxwell Wilde, Earl of Worsley, was returning to his home after an absence when he noticed someone injured. To his shock, it was the woman he had loved and hoped to marry. That is until she disappeared and he found out she'd married another man. He thought he was long over Maggie Winters...he was wrong.

Lady Maggie Tipton once had a wonderful life. Loving parents, a little brother, and Max. In a weeks' time, she lost her family and was sent off to marry an old, cruel man. She'd been waiting for the right time to escape her “prison” and finally, the time came.

Now, they were under the same roof with the same feelings from three years ago. But all was different. And they were finding out that Maggie had more enemies than her cruel husband and she wouldn't be safe until they found out who they were and how to stop them. Wonderful characters and a good storyline.

Book 2: Romancing a Wallflower
John Andrews, the fifth Earl of Harlow, friends with Maxwell Wilde from the previous book, The Earl She Left Behind. A year ago, while searching for smugglers, John had witnessed an accident when a young woman was thrown from her horse. He had brought her to her parents and had her on his mind all this time. Never seeing her since then.

Lilian DeLacey watched from the wallflower area as her twin sister, Lydia, enjoyed the ball. A year ago, she'd been able to dance as well. No more. Not since her accident. Her life would never be the same, even though Lydia believed that Lilian would be whole one day.

That ball, sitting with the wallflowers, changed Lilian's life. And John's. Although he had things to overcome in his own life as well. Not believing he could ever marry. Love, romance, danger, and suspense all put together for a beautiful story. 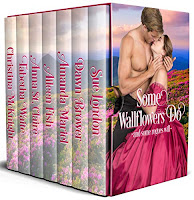 Also included in this set

Lord Adam Hunter had come home from the war with his world a different place than he had planned. Anger and betrayal had pushed him to something he shouldn't have done. But that was behind him now. Life finally brightened when someone from his past reminded him of better times.

Lady Evie had always had feelings for Adam. But, when she lost him to another, she backed out gracefully. Perhaps now that he returned from the war, they could at least be friends once again.

This is a novella, but full of good times, bad times, and looking to a brighter future. An enjoyable read.

Colin Nelson, the fifth Earl of Shefford, won a building while gambling. He hoped it would be perfect to open a fencing salon for his brother to run. What he didn't expect was for it to be occupied by a beautiful woman who ran an orphanage. Things didn't quite turn out as Colin expected.

Miss Honoria “Nora” Mason was so happy with the running the orphanage. With her grandmother's help, she hoped to teach the children skills that would keep them off the streets when they were older. So, having a man show up saying he owned her grandmother's building was just not right.

Once Upon a Haunted Heart

Lady Violet Hanson is excited to be betrothed to the most wonderful, handsome man. However, odd things begin to happen as it gets closer to their wedding. Dreams, accidents, uneasiness.

Edward Baxter, the Earl of Whitlock, is still getting used to his new position. A year or so ago, his cousin Daniel died in the war, and then his uncle died. Bringing the title to him. When accidents happen and he sees a ghostly woman, he decides it’s time to investigate more into his late cousin’s life.

The dying words of a young woman betrayed by her betrothed’s father are a curse. She won’t be here in life to have justice done, but perhaps even in her death… This is a short but full story.

Ella Grace Whitford really hates those darn Yankees. They've taken over her town of New Bern, North Carolina. Her brother left home to fight them. Her father left to supposedly find her brother. And she is left at Silver Moon to keep things going with the few workers, she refuses to think of them as slaves, that haven't run off and to care for her young brother. And now? Now the Yankees are going to take over her home!

Colonel Jackson Ross would never fall in love again. He'd been burned once and that was enough. The Union Army was his life now. Until a woman with flashing green eyes and fiery red hair enters his domain.

This story really pulled me in and never let go until the end. I felt it flowed beautifully even with all the different facets. The pain of war, seeing “enemies” as people, being it's the Civil War era...word didn't come quickly like nowadays. Ella's struggles of finding good in someone she felt she should hate and so much more. Looking forward to more in this series.
**Sexual content
********************
Wicked Earls' Club - Multi-Author Series

Book 6: Earl of Weston - Co-written with Lauren Harrison
Edward Hunter, Earl of Weston was at a place he really didn't want to be in his life. He never planned on being more than the second son—wasn't raised to be an earl. But life is never what one expects. Now, he not only holds the title his brother should have had, but he is also trying to find out who murdered his brother.

Hattie Longbottom and her best friend, Archie, are heading to start a new life. The life of a spinster who has depended on her brother's hospitality. Her traveling day hasn't gone too well so far. And it's about to get even worse.

Archie is a great addition to the story. A large parrot who enjoys picking up new words and yelling them. I enjoyed the storyline and secondary characters, and I hope their stories will be told in future books.
**Sexual content

Lord Thomas Bergen belongs to a club of bachelor earls and he's enjoying his single life. That is until a small donkey he names Clarence, changes everything. At first, it's just another widow he plans on wooing. But, something changes this Christmastide season.

Elizabeth Newton may be a widow, but she has three children to look after and isn't going to be some rogues play toy. But she does love the adorable donkey he's brought to add to her menagerie. He's quite the unusual little critter. Too much time around the handsome earl isn't good for her though. He's as...or more...charming than little Clarence.

Loved this story. It's so humorous and Clarence with his antics and little Marie with her childish lisp add so much to the story. Aunt Faith and Aunt Jane are unique in their own ways and put in the same house add even more humor.