*********************
Charlaine Harris
The Southern Vampire Series/
Sookie Stackhouse
**The Novels are in the correct order,
not positive about the anthologies

Book 4: Dead to the World
Amazon

Book 5: Dead as a Doornail
Amazon

Book 7: All Together Dead
Amazon

Book 8: From Dead To Worse
Amazon

Book 9.3: Must Love Hellhounds - The Britlingens Go to Hell
Amazon

Book 10: Dead in the Family
Amazon

Book 11.5: Home Improvement - If I Had a Hammer
Amazon

Book 12.5: An Apple for the Creature - Playing Possum
Amazon

Book 13: Dead Ever After
Amazon
Sookie Stackhouse's life is turned upside, as usual. She made the choice to save Sam in book eleven and he isn't quite the same from his experience, and her choice didn't go over well with Eric.

A few old enemies come back for revenge. All their anger and hatred is aimed at Sookie and they plan to ruin her, one way or another. The problem is they stay in the shadows so Sookie has no idea who is pulling the strings. Strings that pin a murder on her.

Poor Sookie just wants to sit in her lounge chair, in her bikini, and enjoy the sunlight. Why can't people just leave her alone? And really, just how many enemies can one girl manage to gather at her age? Obviously...plenty.

Sookie's adventures come to an end in this final book of the series. It brings many characters back from the previous books. It ties up most of the loose ends in Sookie's life and in the lives of the people surrounding her. The author had written one final book to let readers know what happened after the series; After Dead: What Came Next in the World of Sookie Stackhouse.
**Sexual content and language

Book 13.5: After Dead: What Came Next in the World of Sookie Stackhouse
Amazon 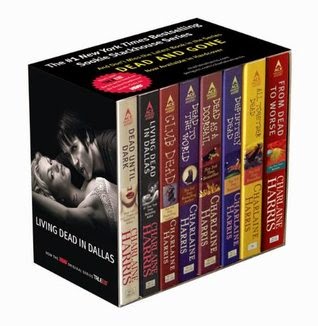 Killer Curves
Amazon
Celeste Bennett knows a secret and when someone else finds out about it she has to make a choice. While the one choice will save a life that same choice will destroy a family. She must enter a world unknown to her to help her make the right decision. Going from the her high class and structured world in New York to the world of stock car driving. What first seems like culture shock quickly begins to feel like home.

Beau Lansing had lost his father to a drunk driver when he was a teenager. He would do everything possible to help the man who had stepped into those shoes twenty years ago. He is determined to get this debutante to help him. She may not be his type of woman, but he finds himself enjoying her company while trying to help her make the right decision.

There is more at stake then Celeste’s decision and she ends up in charade that she’s falling deeper into each day she’s around Beau, and that’s not all she’s falling into. Not to mention a supposed curse that is causing all kinds of issues for the racing team. More mystery and mayhem is happening off the track as well as on it. A story line that holds on and keeps you turning the pages to see what happens next.
**Sexual content and language

Roxanne has two more racing related books in the Harlequin NASCAR Library Series as well; A Nascar Holiday: 'Tis the Silly Season and Thunderstruck. Reviews for these books are at:
http://justjudysjumbles.blogspot.com/2013/05/harlequin-nascar-library-collection.html
*********************
Tina Reber
Love Series

Book 1: Love Unscripted
Amazon
Ryan Christensen is the hot new actor every woman wants, well almost every woman. Taryn Mitchell is an independent business woman, the owner of Mitchell's Pub, a tavern that has been passed down to her, she don't need or want a man to tell her what to do. The last man in her life proved she wasn’t enough for him so why would she want to ogle a famous actor? Only fate changed all that when she rescues Ryan from a mob of wild fans.

This book is told from Taryn's point of view. Her life changes drastically when she meets the handsome actor. Crazy fans who hate her. Unrelenting paparazzi who have no boundaries when it comes to getting that perfect picture that will bring in the big bucks. Add with the right words under that picture….it can be made to show what's not there. And to top it off you have the spoiled and jealous co-stars.

A roller coaster ride best explains this book for me. I found it overwhelming at first that it's such a long book so it started out slow for me but believe me it hits the ups, downs and curves at a speed that left me both wanting to see what was coming on the next page and wanting to cover my eyes so I wouldn't have to see it. And then it comes to a smooth end. The next book, Love Unrehearsed, continues Ryan and Taryn's journey.
**Sexual situations and language
**Received through NetGalley for review

Book 2: Love Unrehearsed
Amazon
Book Blurb:
There is no rehearsal for true love.

When A-list film actor Ryan Christensen ducked into her pub to escape his screaming fans, never in a million years did Taryn Mitchell think her life was about to change forever. But now, eight months later, after a whirlwind romance, Taryn wakes up in Ryan’s Hollywood hotel room to find a diamond to die for on her left ring finger—and her face splashed across the cover of every gossip magazine.

Ryan’s very public proposal is catnip to the tabloids, his management team is worried, and Taryn must figure out how a small town girl like her fits into his glittering world. What does it take to make a relationship work amidst telephoto lenses, daily on-set temptations, and jealous fans who will stop at nothing to keep you from walking down the aisle with the man of your dreams?

With no script to follow and no chance for a dress rehearsal, Taryn and Ryan will be forced to take the plunge and risk everything to make their love last.

My Review
I highly suggest reading Love Unscripted if you haven’t yet. It is the first book and Love Unrehearsed picks up right where it left off. Taryn Mitchell is a small town gal who owns a tavern and after slipping away from fans to hide out in her bar, Ryan Christensen….big time movie star….finds a gal who hasn’t seen his movies and likes him for himself. They have all types of roadblocks in the first book but end up engaged. Now in book 2 we find that even with the diamond on Taryn’s finger, the roadblocks are still there….maybe even more this time.

Tina Reber does a great job of bringing her characters to life and at pointing out what it might be like to be in the limelight. Paparazzi hiding and taking private pictures leaving Taryn and Ryan no privacy. Crazed fans who will go to any extent to gain the attention of their idol. Ryan enjoys acting but there’s so much more than just making the movies. The photo shoots, tours, promoting and award ceremonies. This book starts off at a run and keeps going. Trust between our couple must be strong because it’s hard to trust anyone else around them. Not to mention all the nay-sayers who don’t believe their relationship will last and the other stressful situations confronting them as well. I really enjoyed these two books and look forward to more from this author in the future.
**Sexual situations and language
Posted by Just Judy's Jumbles at 4:37 PM